A client once told me how stressed out she was by watching the news. “What’s preventing you from turning it off?” I asked. To which she replied, “I have to stay informed!” This began a conversation about whose script she was working from, hers or someone else’s. Her story went something like this: “If I don’t know about everything that’s going on in the world, I’ll appear uninformed, and people will think less of me.”

I asked what alternative story she might adopt that would support her in lowering stress, which was getting in the way of many things, including working well and enjoying her life. Initially, she was resistant, unable to get her head around the idea that there might be another story to tell.

But then a light went on. “Oh,” she said, “Do you mean that maybe it’s not true about me having to know everything? That I just made it up? Or somebody else made it up and I bought it? “Bingo!”, I said, and patted her on the back. “Now, let’s think up a better story.”

What’s your story? What are you telling yourself that’s keeping you from finding joy, and getting things done in a way that’s safe and sane? Here are some other popular, and equally destructive, stories you might have heard:

Wow! Who made this stuff up? Actually, it was me, aided, of course, by cultural messages and habits of thought we all pick up if we’re not paying attention. A big shift happened when I became aware of my stories and realized that I could replace them with better ones, like these:

While we can’t control the stories other people tell, or the cultural fishbowl in which we swim, we can interrogate our own thinking. We can identify the narratives we run over and over, ask how they’re serving us; and, if they are not, we can replace them with ones that support us in living our best life.

What’s one story you tell yourself that isn’t serving you? What would you be able to do, and how would you feel, if you stopped telling this story? What new story might you tell that would support you in doing and feeling your best and owning your day? 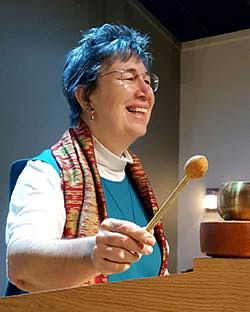 If you’ve spent any time with the M&B team, you’ll know how enthusiastic we are about mindfulness practice. Focusing our attention with skill allows us to get more done, minimizes stress, improves performance, supports health, and enhances relationships. Many of us associate mindfulness with sitting meditation, yoga, prayer, or martial arts. While these are tried and true avenues, we can also bring awareness to simple acts in everyday life, like cleansing our bodies to keep ourselves safe during a pandemic.

This is a video of “Embodied”, the last sermon by the Reverend Elizabeth Teal, a dear and longtime friend of mine, who passed recently. Liz describes how the mindful act of washing our hands, face and feet can provide us with connection we so need in these times of physical distancing. She shows us how to turn a mundane necessity into a sacred rite of self-care and compassion, which is exactly the kind of alchemy that can take place when we bring awareness to everything we do.

The challenge in today’s workplace is to be increasingly more efficient, effective, and above all creative in our work. To rise to this challenge, we must be able to focus our attention and devote our time to the tasks that matter most, whether that be preparing for a sales presentation or writing a report for stakeholders.

In our hyper-connected world, this means not only escaping from interruptions in the physical world, but the endless barrage of alerts coming from our computers and mobile devices. Setting up boundaries, both physical and digital, leaves open the necessary mental bandwidth and the freedom to pursue our creative endeavors.

Below are a few tips for setting boundaries in the workplace and creating the space to focus on the most important tasks in front of you:

Whatever space you use should conform to established organization polices and be most conducive to how you work. Some people like absolute silence, while others thrive in a busy space full of white noise. Working from home has its own set of benefits and challenges for getting things done. Be thoughtful with whatever you chose.

This article is the first in a series on how to most effectively manage our time and attention for the work that matters most. Subsequent articles will look at technology and how we interact together in organizations. Check back next week for more!